Professor Rob Quicke, GM of 88.7 FM, stated, “For his efforts in producing creative and exciting radio over the course of his career, the students of WPSC are delighted to recognize Elvis Duran with this year’s Bravery In Radio award. Elvis is a broadcaster who creates undeniably compelling morning radio that is unafraid to address serious topics and go to places that other shows will not go. Elvis is very much an authentic broadcaster who truly connects with his listeners.” 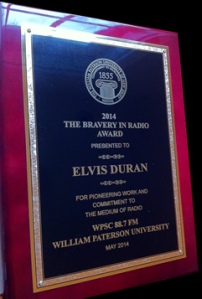 WPSC presented the award live on the Z100 morning show on May 9 at 8:00 am. Dr. Quicke says that the students enjoyed the experience: “The students were very excited to see with their own eyes how Elvis and his team create their compelling radio show.”

Elvis Duran hosts the Top 40 Premiere Radio Networks’ “Elvis Duran and the Morning Show”. The show (branded Z 100) is broadcast from New York City but is syndicated to 75 markets including: Philadelphia, Miami, Cleveland, St. Louis and Austin to name a few.

Elvis Duran’s bio states he loves traveling, enjoys great movies, books, wines and restaurants. He loves hosting the morning show which airs live weekdays from 6-10 AM Eastern and in the Central markets; “Elvis Duran And The Morning Show” airs live 5-9 AM (CT). Other time zones that are further west, the show airs via tape delay.

THE BRAVERY IN RADIO AWARD

The ‘Bravery in Radio’ Award is presented by Brave New Radio (WPSC 88.7 FM and gobrave.org), the radio station of William Paterson University in Wayne, NJ. Brave New Radio is committed to producing radio programming that is groundbreaking and exciting, and in keeping with that tradition, the radio station’s management has created the ‘Bravery in Radio’ Award to honor those in the industry who exemplify the same goals.  You can read more about the story of the award by clicking here.

The recipient of the award is chosen by the radio station staff and announced to the public in April every year, corresponding with their live music marathon or Braveathon event.

Every year this award is presented an individual, individuals or radio show who are recognized for their contribution to the world of radio. Specifically this award recognizes those that have achieved one or more of the following: